Russia is the largest country in the world by surface area , covering more than one - eight of the earth's inhabited land area .

The capital of Russia is Moscow.  It comes in the continent of Europe.

Its ISO Country Code is RU.  Its official name is Russian Federation.  The people here are called Russian.  Its currency is Russian Rouble.  Its currency code is RUB.  Its area is 1.7098242E7 Km2 .  Its population is 145,922,010.  Here the population growth rate is 0.04.  The language here is Russian, Others.
The Europeon western part of the country is much more populated and urbanised than the Eastern . Russia spans eleven Time zones and incorporates a wide range of Environments and landforms .
From northwest to southeast , Russia shares land Borders with Norway , Finland , Estonia , Latuia , Lithuania and Poland , Belarus , Ukrein , Georgia , Azerbaijan , Kazakhstan , China , Mongolia and Northkorea . It shares Maritine borders with Japan and the US State of Alaska across the Bering strait . 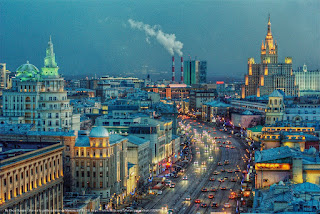 Russia is one of the world's top supplier of arms , a spot it has held since 2001 , accounting for around 30 % of worldwide weapons sales . Russia  possesses 10 % of the world's arable land . The Ural mountain , rich in mineral resources , form a north - south range that divides Europe and Asia.