It was the month of march . I had a very sweet dream one night . A friend came to me with the happy news that I had won a scholarship . The Government of india had selected me for higher education in London . I had to go there by air . This was the beginning of my sweet and unforgettable dream . 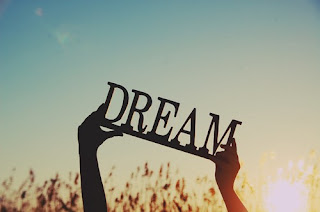 I went to the airport . Many of my friends and relatives were there . They had come to see me off . The scene of the departure was heart - touching . But my parents consoled me . They asked me to be good and hard - working . I promised them to write letters on every sunday .
A big jumbo jet was waiting for me . I got into the plane . In a few minutes , it took off with a roaring sound . The plane rose higher and higher . The Bombay Airport become invisible . I looked down , but I could not see anything clearly .
Then I turned back and found sunil Gavaskar , kapil Dev and Ravi Shastri sitting . They were going on the cricket tour to England . They were talking about the English seasons , weather and way of life . I heard them for some time . Then I asked them several questions about cricket .
The plane flew over land and seas . It flew above the clouds . The blue sky was clearly visible . I found Amitabh Bachchan sitting next to me  . He also was going to England for the shooting of a film . He became very familiar with me .
He told me many stories about the filmworld . He also sang a few songs . The journey was very pleasant . Then I heard the announcement that the plane was going to land at the  Heathrow Airport . I could see tall buildings , hills and rivers . My Joys knew no bounds .
But all my happiness came to an end soon . A friend of mine called me . He had come to my house for a book .Alas ! My happy dream was gone . My dreamland disappeared for ever . But the sweet dream is still very fresh in my memory .