The rainy season one of the most useful seasons in india . It comes after the summer season . The earth is very hot during summer . The hot wind blows . The whole day is uncomfortable . So people welcome the rainy season . 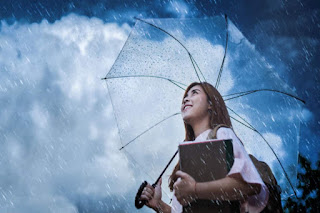 It gives them a lot of relief . The sky is often covered with dark clouds . Lightining and thunder - storms are the two chief agents  of the rainy season . There is water , there is mud almost everywhere we go during this season .

In india this season is generally starts in the month of June .  It ends in September . This season is very important for farmers . All crops depend on natural rain in india . If it rains in time , we have good crops .

The rainy season is a season of relief for the people of big cities . The problem of drinking water becomes acute in summer . Rivers and lakes begin to dry up . If there is no rain in time , people have to suffer a lot .

Besides , the rainy season is important for poets and writers . Poets look at the green trees and plants . They find greenness  in fields , too . They are attracted by the music of frogs and other creatures . Ponds and rivers are full of water . Kalidas speaks high of this season in his Meghadoot .

But there are some problems In the rainy season also . Rain water makes the road muddy and dirty . Sometimes rivers overflow their banks and bring floods . Floods destroy crops .

They wash away houses , railway lines , roads etc . People became helpless and homeless  . Some serious diseases break out after floods . Poor people have to suffer most when it goes on raining for days together .

After all , the rainy season is a season of beauty , Hope and Joy. I like it very much .