Football is one  of the most popular games in india . Football has the longest season . Very recently I saw a football match between Bihar University and Ranchi University .  The match was  played on the L.s. College  ground at muzaffarpur . 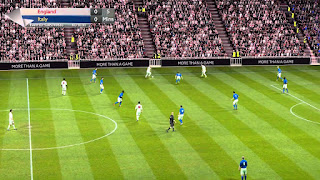 The match started at 4 p.m. The players were on the ground . A large crowd was waiting for the match to start .

Bihar University  players were dressed in black pants and red shirts .  But the players of Ranchi University  were in red pants and green shirts . The referee blew a long whistle . Both the captains came to him to decide about the ball and the side .

The play started well . The match was full of life . The centre forwards ofcRanchi University  were very strong .  They played an interesting and attacking game . But the goal - keeper of Bihar University saved several dangerous balls . 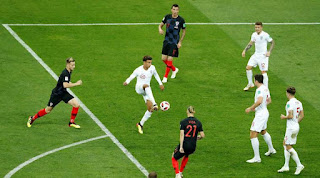 The full - back of bihar University were good . But other players were not up to the mark . So , the game was almost  one - sided for some time . But in the 15th minute a player of Ranchi scored a field goal . Thus the score was 1 - 0 in favour of Ranchi University till interval .

After interval the play was  all the more interesting . All the players were in high spirits . The players of bihar University were pressing hard . But they could not score . At last they were awarded a penalty kick . It was a golden chance to equalize the score .  And it happened so .

Both the  teams were 1 - 1 after interval . We all were very happy . The game gathered momentum again . But no goal was scored . The time was running out . The final whistle blew . The match ended in a draw . It was really a very thrilling football match .