India was at the mercy of its rulers before its independence on 15th August 1947 . The British did whatever they liked to serve their interests . They broke the e economic backbone of the country . 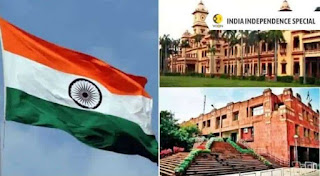 They divided us on social , religious and political grounds . But our country has been solving its problems ever since its independence .
Soon after independence , india started building its economy . It faces the problem of ever - rising population . But its resources are limited . Now  we are trying to check  the growth of population .
Our agriculture productions have increased . The gap between the rich and the poor has come down . The per capita income of the country has also increased . The economic condition of the nation is better today . We are trying hard to end poverty which we got as a gift from the Britishers .
Today  india produces doctors , engineers , professors and scientists in a very large number . We had to import even pins before India's  freedom  . Now we build big ships , planes and other such things . We have set up heavy industries . We export many of our industrial productions to other countries . Our satellite is in orbit . We have produced an atom bomb . We have produced lots of missiles for our defence purposes . We are training scientists of other countries in nuclear technology .
We are setting up industries in the third world countries . Our man has gone into space . We have all things of comforts . Now a television antenna can be seen on almost every house - top in a town .
India is a democratic country . It follows the policy of peace and brotherhood . People of the country have freedom to Express their views . Our foreign policy preaches love , justice , freedom and equality .
Our policy of non - alignment is bearing fruits . We are trying to have a socialistic pattern of society . Every citizen has equal rights and duties . India is a secular country . It is a land of different religions , cultures and  languages . In truth , the nation has achieved something great in social and political fields after its freedom .
Today india is a powerful country . It has made a mark in the field of education and sports . Its voice is heard in the world . It is respected by all . Super powers try to win it over to their sides . If everything goes well , india may be one of the most powerful countries in the world by the next century .