Home Essay Waiting for a train

Waiting for a train

" But the waiting time , my brothers ,

Is the hardest time of all ."

Travelling by train is a common experience . People go to the station to catch a train . They wait for the train sometimes on the platform and sometimes in waiting rooms . The platform is an interesting place . 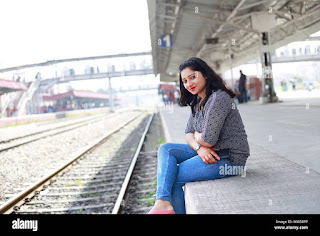 It presents different kinds of scenes . Waiting for a  train  is also a kind of experience . The whole atmosphere is lively on the platform . Some beggars sing religious songs and go on begging . Some people are on the benches . Many others are either moving about , standing or gossiping .

A man who waits for the train enjoys the scenes at the station . Waiting in a waiting - room has its own  pleasure . Comfortable chairs , benches and desks make the passengers proud in the first class waiting room . There are office - rooms at the station . But waiting for a train is dull at times .

An intelligent man makes his dull time pleasant . He enjoys scenes of different parts of the station . Booking - offices present a nice scene . A second class booking - office is generally overcrowded before the arrival of a train . At times pick - pockets are active at the station .

But waiting for a train is a pleasant experience after all . Generally , elderly people dislike it . But children like it very much . Waiting for trains is a  troublesome task on winter nights . It is a boring thing even during the rains . But a child is always happy - be it a cold night or a rainy day .

He runs , jumps and looks at new things at the station  . He sometimes asks for sweets and sometimes for other things . But elderly people look worried while they wait for the train . In brief , waiting for a train is a thrilling experience for children , though it is not always so for grown - up people . 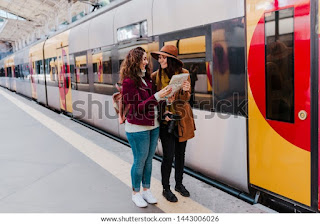 A man waiting for train has his eyes fixed towards the signal . He often goes to the enquiry office for information regarding the train . He gets ready to board the train are found running to catch it . The scene on the platform becomes still more interesting when the train stops . The door of the compartment is over - crowded by in - coming and out - going passengers .

A journey by Train

" one of the pleasantest things in the world is going a journey ," says Hazlitt . We have aeroplanes , ships , buses  and trains . But a long journey by bus is troublesome . 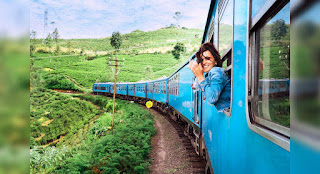 Travelling by air is very costly  . We have cheap and popular means of travelling , too . And that is a journey by Train . A journey gives us a first hand knowledge of things and places .

Very recently i made a journey to Deoghar.  We know it is a religious place for the Hindus . A large number of them go there almost every day . I went to catch North Bihar Express at muzaffarpur . The train was late . My friend also was with me . We booked the tickets and had our seats . The platform was crowded . It was just like a small fair .

The train moved fast . I saw trees , houses and fields passing behind . In the meantime a man began to sing a song in the compartment . He was a singer by profession . Everybody began to listen to him . The man sang different kinds of songs . His songs were very sweet .

We did not know how the time passed . When he got tried , another man sang . Thus we spent our time nicely . It was nearly 11 p.m.  I felt sleepy . But the pleasant atmosphere kept me awake . However , I got down at jasidih .

Travelling   without ticket is a common thing today  . People take it as  a fashion not to buy tickets . They like to travel by bus  or by train without tickets . 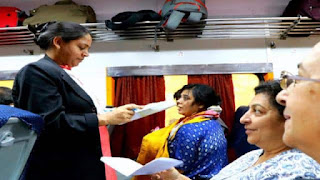 Many young men have developed this bad habit . Hero - like persons feel that it is below their dignity to buy tickets . They take it as their birth right to travel without tickets .

Ticketless travelling is very harmful . Our railway suffers a lot . The loss of the railway is the loss of the public . Thus it is our loss . Its income comes down and expenses go up . 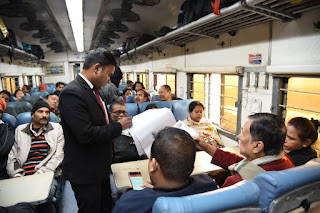 They occupy the seats of genuine passengers . They create ugly scenes when they are asked to vacate the seats or berths . They are happy - go - lucky people . They may pull the chain and stop the train at their sweet will . The train gets late . But they care a little for all that . These ticketless travellers make our journey unsafe and unpleasant . Ticketless travelling is a social evil .

Ticketless travelling must stop . Our students must develop a moral sense . They should think of the national interests . They must be men of character . Educational institutions should take some steps . Students should get concessions in buying tickets .

Parents should also force their children never to travel without tickets . The government must give severe punishments to ticketless travellers . Ticketless travelling is a serious social problem . We must try to solve it on a war footing .