The mass media is flooded with advertisements of every kind. One only has to flip through the pages of magazines or newspapers or sit through a television program to see the wide coverage that advertisements receive in terms of space and time. 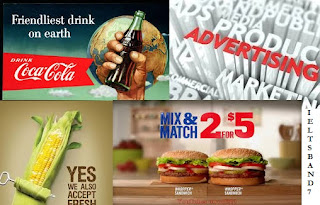 Companies fork out large amounts of money just to advertise their products or services.

What, the, are the benefits of advertisements ? Advertisements offer a wide variety of options to both potential buyers and sellers. Through advertisements, employers can recruit workers. People who wish to put up their properties for sale can find buyers or vice versa.

Many companies build a reputation for their products through advertisements. Sometimes companies sponsor major sporting events and help in the development of sports in the country.

Advertisements inform the public about the wide array of products that are available in the market an dhow much they cost. Customers can compare the prices and merits of the different products and then decide which product to buy. Advertisements help increase the sales volume of products. In this way, companies expand their business and enjoy economies of scale.

As with most things in life, advertisements can be both a bane or a boon. Nevertheless, in my opinion, the advantages of advertisements far outweigh the disadvantages and it is up to the discerning public to discard the advertisements which do not profess the truth.