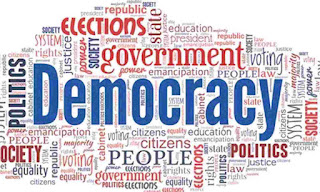 The ideal of democracy is that of equality, freedom and welfare for all. it involves the abolition of very form of restriction and privilege. Ancient democracy was based on the direct participation of the masses in public affairs.
Modern democracy is representative in character and it demands not only universal adult suffrage, but also the active participation of the people in government. Thus, in a democratic state, the acts of the government are in accordance with the will of the people, since they have the right to elect and remove their leaders and the right to determine the main lines of policy.
Nevertheless, democracy is a matter of degree, and no complete expression has yet been given tot eh ideal of democracy.

"Our constitution is named a democracy, because it is the hands not of the few, but of many. But our laws secure equal justice for all private disputes, and our public opinion welcomes and honors talent in very branch of achievement, not for any sectional reason, but on grounds of excellence alone." These words of Pericles uttered in the 5th century B.C., still hold good and may be considered by far the best definition of democracy.

Democracy implies political liberty. Political liberty consists of the right to vote, the right to sand as a candidate for election, the right to hold public offices, freedom of speech, of association, of worship and of opinion. All these secure the individual, the most fundamental right of political participation. By giving everyone a share in the government, democracy prompts patriotism.

Democracy is based on the doctrine of equality. Inequality has been the cause of all the revolutions which have changed the face of the world. Popular government resting on the will of the people and on the principle of equality are immune from all revolutionary disturbances.

The greatest merit of democracy is that it elevates the character of the citizens. It demands a high standard of morality and honesty on their part. It provides for the fullest possible development of all its citizens and gives each citizen, a sense of responsibility.

In a democratic society, reason governs the conduct of men and each man feels responsible for his actions. Here every person contributes some thought or feeling to the common life. Thus, democracy is not only a form of government, but also a way of life. In a democratic state, each citizen is an integral and irreplaceable part of the whole.

it gives each citizen, a sense of responsibility. "When political institutions call upon him to bear a part in their working, he is taken out of the narrow circle of his domestic and occupational activities, admitted to the larger life, which opens wider horizons, associated in new ways with his fellows forced to think of matters which are both his and theirs" says Bryce. 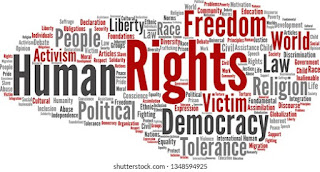 The above principles imply that every citizen in a democratic state should have the opportunity to develop his personality. he must have access to knowledge, must be able to earn an adequate wage.

The state must guarantee him the right to work as well as leisure. It must protect him from being exploited by the well-placed sections of the community or the privileged class. All these raise the important questions of education of the citizens of a democratic state. Education must teach them not only to assert their rights, but also to discharge their duties.

It must teach them to think and act freely and express their views boldly. But, the system of education must guard against making the citizens selfish or overcritical. The education system must be adapted to suit the needs of democracy.

Also leadership and proper organization are other important requisites of democracy. Without proper organization, the people cannot express themselves effectively. The leader of the party must be responsible, honest and courageous. He must be able to think clearly and act boldly.

He must have the ability to judge public opinion correctly. Above all, he must adhere to high principles. An unscrupulous leader might easily become a dictator and endanger democracy.

Given favorable conditions, democracy is the best form of government known so far. It reconciles liberty and authority; it imbues the citizens with a sense of patriotism; it is a government by discussion; it rests on the will of the people; it treats all individuals as equals and tolerates the opposition; it aims at giving the greatest happiness to the greatest number of citizens in a state. Under the democratic form of government, human character develops and the individual realizes his best self.