Durga Puja is a religious festival during which a ceremonial worship of goddess Durga is performed. It is an important festival of India. It is a traditional occasion which reunites people into the one Indian culture and customs. 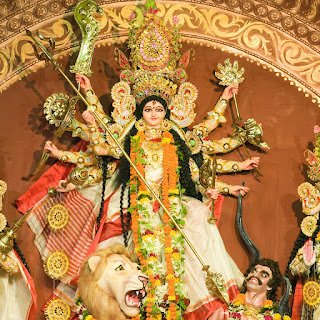 Varieties of rituals are performed all through the ten days of festival such as fast, feast and worship. People perform statue immersion and Kanya pujan in the last four days which car called as Saptami, Ashtami, Navami and Dashami. People worship a ten-armed goddess riding the lion with great enthusiasm, passion and devotion.

Story and Legends of Durga Puja

There are various stories and legends of Durga puja which are mentioned below:

The festival of Navaratri or Durga puja has various significances. The meaning of Navaratri is nine nights. Tenth day is known as Vijayadashami or Dussehra. It is the day when goddess Durga got victory over a demon after nine days and nine nights long battle.

Goddess Durga is worshipped by the people to get strength and blessings. Worshipping Goddess Durga helps devotees to remove negative energy and negative thoughts as well as get the peaceful life.

It is celebrated to commemorate the victory of Lord Rama over evil Ravana. People celebrate this festival by burning the big statue of Ravana and fireworks at night of Dussehra.