An elephant is very clever, obedient and biggest animal on the earth. It is found in the Africa and Asia. Generally, it is found in grey color however white in Thailand. Female elephants are used to live in groups however male elephants solitary. Elephants live long life more than 100 years. 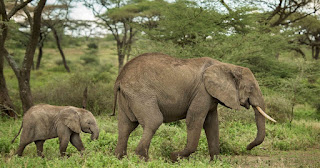 Elephant skin becomes one inch thick however very sensitive. They can hear each other’s sound from long distance around 5 miles away. Male elephant starts living alone whenever become adult however female lives in group (oldest female of a group called as matriarch). In spite of having intelligence, excellent hearing power, and good sense of smell, elephants have poor eyesight.

Elephants look very attractive to kids because of its interesting features such as two giant ears, two long tusks (around 10 feet long), four pillars like legs, a huge trunk, a huge body, two small eyes, and a short tail. It is considered that tusks are continued to grow entire life.

Trunk is used to eat food, drink water, bath, breathe, smell, carry loads, etc. It is considered as elephants are very smart and never forget any event happened in their life. They communicate to each other in very low sound.

The baby of an elephant is called calf. Elephants come under the category of mammals as they give birth to a baby and feed their milk. A baby elephant can take almost 20 to 22 months in getting fully developed inside its mother womb.

No other animal’s baby takes such a long time to develop before birth. A female elephants give birth to a single baby for every four or five years. They give birth to a baby of 85 cm (33 inch) tall and 120 kg heavy. A baby elephant takes almost a year or more to learn the use of trunk.

A baby elephant can drink about 10 liters of milk daily. Elephants are at risk of extinction because of their size, prized ivory tusks, hunting, etc. They should be protected in order to maintain their availability on the earth.