In a narrow sense, the term. "gambling" means playing for money and engaging in wild financial speculations. The moment a person takes a chance on anything, he is gambling. 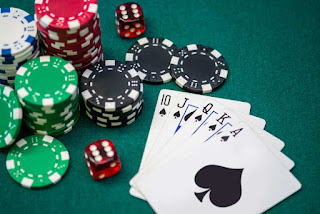 If you are not sure which of the two rope bridges across the river is the safe one, and decide to take any one of them and hope for the best, you are gambling. There are many, many times in a man's life when he has to make a decision, and he finds that he does not know which course will benefit him.
I feel that this is the core of the act of gambling - resorting to the element of chance or luck, when all one's powers of reasoning cannot influence one's decisions.

Gambling which most moralists consider evil need not be always evil. I personally feel that moderation in gambling means that you do not risk more money than you can afford.

When you find that you have enough money both to satisfy your basic living requirements and to spend on luxuries, you may not mind gambling. But you exceed the limits when you gamble and find that your gambling is robbing you of your minimum comforts of life.

The trouble with most people is that they start off with small sums and end up with colossal debts. This kind of excessive indulgence is harmful and it becomes a vice, just as drinking to excess or smoking to excess are smaller vices. Sometimes small sums of money spent by people at games like "mahjong" are considered worth it because they provide entertainment.

Buying toto coupons or lottery tickets constitutes gambling. But when one buys these, he is in actual fact helping his fellowmen. The sum of money that one spends on these mass-participation projects is trivial: some of us do not remember having brought lottery tickets sometimes.

Secondly, the money that the organizers earn is used for building useful projects or to aid people in need of social welfare. In a small way, it also satisfies the gambling urge in most men.

Why, then, does society frown upon gambling, and why is it that the police keep such a watchful eye on gamblers and places where gambling is reported to he held? Most of us disapprove of gamblers because we know that professional gamblers often use unfair means to win. We also disapprove of people who make a living out of the miseries of others who lose to them.

The police know that heavy gambling involves large sums of money and that large sums of money attract thugs and robbers. Many gamblers who find themselves in irretrievable debts have been known to commit suicide. Others have been known to hire gangsters to force money out of fellow gamblers who have lost and who fail to repay their debts promptly.

The word "gambling" has acquired unpleasant connotations largely because gambling can lead to excess. But it is generally convenient to look upon gambling as an activity in which people take risks in the hope of earning more through the element of chance. "There are two times when a man should not gamble - when he has no money and when he has money".