Global warming is a hazardous phenomenon going ahead continuously all over the world. It has been irritated by the many human activities. The condition of the environment and society is getting worse and worse. 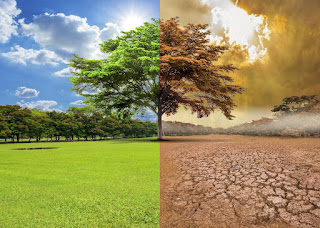 It is an international disaster affecting the humanity in all facets of the modern human life. One of the main effects of global warming is the continuous heating up of the atmosphere.

According to the statements of scientists, there is a direct relation between increase in CO2 gas in the atmosphere and increasing temperature of the earth. According to the IPCC report of 2007, it has been noted that the warmest years has been started since 1992.

In the coming years it would increase to a great extent and call various natural disasters to come more often. Melting glaciers are continuous changing the chemical compositions and temperature of the water.

Increasing water temperature has disturbed the sea life and forcing the sea animals to migrate or die. It seems that in the current years the Coral life will be wiped out. Some of the sea mammals (polar bear and penguins) are migrating or dying out because of the changing icy habitat.

Regular melting of the ice caps is increasing the greenhouse gases levels such as carbon dioxide, methane and other greenhouse gases which are trapping heat from the sun and warming the whole environment.

Melting ice bodies are greatly contributing to the albedo effect which is directly affecting the geographical life. The important function of the ice bodies is to reflect back the extra sunlight and causing cooling effect of the earth, however if they are melting who one perform this function.

Earth warming on regular basis has increased the chance of increasing pests and other disease causing insects like mosquito, culex, dengue mosquito, etc. All the effects of the global warming have deadly affected the human lives both physically and mentally. So, it requires some urgent basis solutions to be solved in few current years.