India is a land of rich culture and heritage where people have humanity, tolerance, unity, secularism, strong social bond and other good qualities. 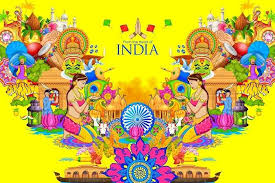 Indians are always famous for their mild and gentle behaviour, in spite of lots of aggressive activities by the people of other religions. Indian people are always praises for their caring and calm nature without any change in their principles and ideals.

He always told us that does not fight with other instead talk them politely if you really want to get change in something. He told us that every people on this earth are hungry for love, respect, care and honour; if you give them all, definitely they will follow you.

Gandhi Ji always believed in the Ahimsa and really he became successful a day in getting freedom for India from the British rule. He told Indians that show your power of unity and gentleness and then see the change.

India is not a country of men and women, castes and religions, etc separately however it is a country of unity where people of all the castes and creeds live together conjointly. People in India are modern and follow all the changes according to the modern era however they still in touch with their traditional and cultural values.

India is a spiritual country where people believe in spiritualism. People here believe in Yoga, meditation and other spiritual activities. Social system of the India is great where people still leaves in big joint family with grandparents, uncle, aunt, chacha, tau, cousins, brothers, sister, etc. So, people here learn about their culture and tradition from birth.