Strictly speaking, a language is a verbalized means of communication, enabling the speaker to convey thought to another person. However, the more complex the thoughts or ideas, the harder or more cumbersome the language becomes. 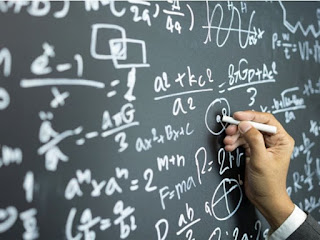 To explain verbally why 'the square on the hypotenuse of a right-angled triangle equals the sum of the squares on the other two sides' would require a long and tedious paragraph. And this is the simplest possible example; anything more complicated would be unmanageable.
So in this way mathematical symbols which nowadays are universally accepted, compress information in a way that no other language possibly could, and this fact supports the topic statement.

However, this language is only available to most people in its simplest forms, i.e. arithmetic, algebra and geometry, and these are taught in schools because they have everyday usages.

The shop assistant needs arithmetic, unless there is an automatic cash till, and technicians of all kinds need the other two; perhaps more, such as trigonometry, logarithms and the calculus, should he or she be dealing with quantities that vary in time and space.

In this sense, of course, mathematics is a minority language, a language intelligible only to the specialists of all nations.

The time may come when knowledge of higher mathematics is far more widespread, however. The new mathematics is now being taught in many schools, sometimes alongside the traditional approach, and younger students find the new methods more intelligible.

The principles of course have not changed; merely the setting out. However, there are great developments available to younger students enabling them to see the subject as a whole rather than as a series of separate compartments, and this should engender more interest in those whose natural bent is in the direction of the arts.

Mathematics has been described as 'the spearhead of natural philosophy', and this was certainly true up to about 1800. The subject grew up independently in China, India, the Arab world and Europe.

For example, many of the Alexandrian and Greek schools of geometricians, represented by Thales of Miletus, Pythagoras, Euclid, Archimedes etc advanced propositions which were already known elsewhere.

The West derived its number system from the Hindu-Arabic world, which reached Europe in about 1000 AD. The West learnt mathematics from the Arab world and, from the 15th century, great developments took place.

Descartes revived algebraic geometry, Napier invented logarithms, Newton and Leibnitz the calculus. Lobachevsky developed non-Euclidian geometry, and was followed by Einstein, though the latter was more of a physicist than a mathematician.

From Newton onwards, mechanics and astronomy began to use advanced mathematics and, later on, physics came in for the same treatment. Both pure and applied mathematics became the indispensable tools of progress.

Pure maths reaches conclusions by means of the deductive process, and may be independent of need. Applied maths consists of developments to meet the requirements of science and technology.

So mathematics has become a beautiful language in several senses. Firstly, in its ability to compress ideas, just as a great poet achieves desired effects by great verbal economy. Second, because its tools, the symbols, are internationally accepted.

Third, because it is entirely objective, and completely exact, allowing no room for prejudice or human emotion. Fourth, because it constantly provides the ground for new hypotheses. These in turn are checked by logic and observation.

Often as with Pythagoras, mathematical conclusions can be checked by other means. So mathematics can lead man closer to absolute truth than any other means, that is in the categories of discovery in which it can operate.

Mathematics means facts , verified by experiment, and these facts are true within the four dimensions in which the human mind can operate. The other dimensions, perhaps six according to Stephen Hawking, must be compressed into infinitesimal space, so are likely to remain the prerogative of the Creator!