The term "Might is right" means that powerful people can do whatever they wish to do, even if their decisions are wrong. This phrase is mostly used in a negative sense. This expression refers to the belief that: 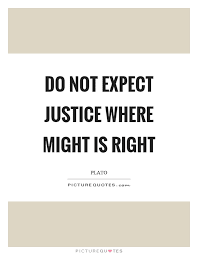 1) There is no one to challenge the decision of powerful people, even if the decision goes against the benefit of the society.

2) The opinions of people who hold powerful position are bound to be accepted by others.

3) A powerful person can prove an action to be correct even if it is otherwise morally unjustified.

4) The actions, even unjustified or immoral actions, of powerful people remain unchallenged by others.

5) Powerful people are entitled to do anything they desire.

‘Might is right’ is an ancient principle. All the decisions of a powerful ruler were considered to be final verdict. When a warrior showed military prowess and defeated others, he would easily gain control over them and make himself their ruler.

He might be called king or duke, but his rule would be one-man rule. No man can defeat others all alone. And, it is not possible for one man to exercise complete sovereignty. That is why in some places and in some ages, we have, instead of the rule of one man, rule by a handful of men.

In the middle ages, in Europe, the king himself was only the first among these Lords who were called Barons. Here, we have the sovereignty of the upper classes over the common people, the rule of the many by one king or by a few powerful men with king at their head.

In India, during the Sultanate Period, the King was considered to be the fountain head of justice. No body could dare to challenge the decision of the king. A benevolent monarch may say that he is the first servant of the state, but under kingship and other forms of government in which the common people have no voice, there is bound to exist a great gulf between the rich and the poor, the aristocracy and the commonalty.

Every person should be entitled to get basic human rights. If the one in power is doing something wrong, there should be a system in place to stop it. Even when there are dictatorships, the dictators have to depend on the support of the common people and to work for them. If they fail to do so, they are bound to be over-thrown. That is an indirect tribute to the power and excellence of democracy.