In the modern world, National Service may take one of several forms and may be ordered by a government for one of several purposes, or of course, it may be voluntary. Whether or not, it is compulsory depends on the urgency of the time. 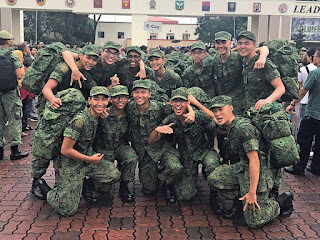 For example, a short spell of army, navy or air force service was compulsory for all young men in Britain during the 1950s when the threat of a Russian advance in Europe was considered real.
In contrast, British civil defense ( ie anti-nuclear bomb training ) had been voluntary in the 1960's, as the threat of nuclear war has receded.

The theory of National Service is that the individual owes an allegiance to the state and should be prepared to come to its help, when threatened by a crisis, which is beyond the power of the police and regular armed forces to deal with.

But modern communications are rapid and modern weapons are devastating and almost instantaneous, so National Service also implies preparedness, and this is turn means training.

Most political thinkers believe such training to be justified, even though, it is not directly linked with an outside threat. Strength and preparedness are, in fact, generally considered the best means of safeguarding peace.

For many decades, France had required military service for all her fit young men for a limited period, and the community accepts the requirement without questions. It is not so elsewhere.

Britain, except since 1945 had never enforced conscription, leaving outside defense to a worldwide deployment of regular forces, supplemented in emergency by the rapid formation of Civilian Armies.

But the complication of modern warfare, the need for specialists, and the diminishing importance of the foot soldier has now changed the pattern. The USA and indeed most other countries today, think along British lines.

Short periods of compulsory training supplemented by voluntary and eventually compulsory conscription to meet a direct threat either to the homeland or to protected territories are now the order of the day.

The particular form of National Service required, depends on circumstances. Basic training in tactics and small arms will do, to fit a people to resist a direct attack by conventional forces using similar weapons.

The sue of, and defense against, limited nuclear weapons may also be included British conscription in the 1950's to the three services was organized on these lines. Thus, a mobile force was available for any zone, backed by  previously trained 'Z' Reserve group required to attend periodical 'refresher' camps.

The diminishing threat is indicated by the reduction of the National Service period from 3 years to 9 months, before its total abolition. today, an all-regular force is deemed adequate.

National Service in wartime has a much wider significance; it includes civil defense and the drafting of both male and female layout not eligible on grounds of fitness for active service into work of national importance, such as munitions manufacture, agriculture and fisheries, and many other jobs connected with the war effort.

This is achieved by 'National Service Acts', which, insofar as the individual is concerned, amount to the statement, "you cannot leave your employment, nor can your employer 'sack' you, without the permission of the National Service Officer".

In peacetime, this more general National Service is voluntary. Britain felled that key personnel should be trained in post-nuclear bomb techniques, and today, has a voluntary organization for doing so, as also has the USA. The general public is urged to join.

Although National Service seems common sense, there are disadvantages. The fist is the large cost to service the civil defense force. The second is the temporary loss of professional or skilled labor to industry. To the individual, there is the personal loss of time, and possibly the difficulty of settling back into a demanding vocation.

The advantages, however, would seem to outweigh them. Singapore has introduced National Service to reap the benefits. National Service provides a trained, mobile force ready for any emergency anywhere.

Finally, National Service widens the individual's personal horizons, makes him (or her) a better 'mixer', instills self-confidence, and often evokes unsuspected leadership qualities which can afterwards be put to good use in civilian life.