How exact is energy got from the atom, for the atom as we know is the tiniest speck of matter? Each atom has a central core called nucleus around which revolve the electrons. 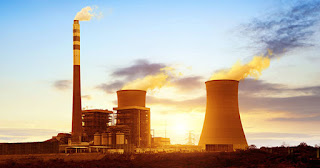 The nucleus is built up of two kinds of very minute particles called protons and neutrons. The electron has a negative electrical charge. The proton has an equal positive charge and the neutron has no charge.

The world got on smugly with these forms until the fateful day in 1945 when the atom bomb exploded over the Japanese city, Hiroshima. That was a practical demonstration of a new type of energy - atomic or nuclear energy.

The atom bomb demonstrated that nuclear fission provided a new and powerful source of energy and that it might be put to peaceful use as well. In agriculture, atomic energy is sold in the shape of radioactive tracers in research for finding the best type of fertilizers formant. In medicine, radioisotopes of iodine are used for diagnosing brain tumors.

Other radioactive isotopes are used for cure of the human laments - in the treatment of cancer, radio-gold. Radio-iodine and radio-cobalt are used. In industry, radio isotopes are used for measuring the thickness of paper, rubber, textile and metallic sheets for the detection of hidden flaws in castings and for the detects of the thickness, flow and separations of liquids.

Nuclear energy offers a new source of cheap fuel for there production of power, especially in spots far removed from human habitations and other necessary requisites for power productions. The first step in the productions of atomic power is the setting up of atomic reactors of which India is gaining world ranking.