Peacock boasts of immense beauty. It is loved for its blue and green coloured body, its turquoise, green, blue and brown coloured feathers and its beautiful crest. Catching a glimpse of peacock dancing during the monsoon season can make your day. Peacock has been a source of inspiration for painters, poets and other artists since times immemorial. 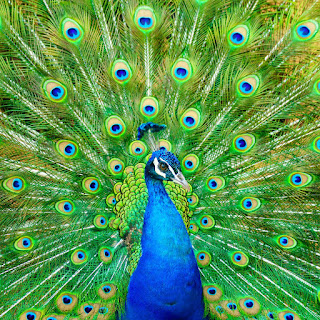 Peacock finds many references in the Indian history. Mughal emperor Shah Jahan especially got his throne crafted in the form of peacock. The peacock throne was embedded with numerous jewels that added to its beauty. The Mughal Empire lost this magnificent throne to the Persian emperor Nadir Shah in 1739.

Hunting was a popular activity during the earlier times and the kings indulged in the same quite often. However, King Asoka particularly ensured that people did not hunt down peacock. During his reign, he made killing of peacock an offence.

Interestingly, Aurangzeb, who was otherwise known for his cunning nature also ensured safety of peacocks. He put a ban on shooting this beautiful bird. During the Gupta period peacock was recognized as royal bird.

Besides, numerous paintings, engravings and pieces of literature in India have been inspired by peacocks. Many invaders were also fascinated by the beauty of peacock.

Peacock has been associated with various Indian Gods and Goddesses. It is believed that peacock came into being from the feathers of Garuda. Garuda is a mythical bird that serves as a mount for Lord Vishnu.

Peacock is the conveyance of God Kartikeya. Kumari, who is a form of Shakti, also rides peacock. This beautiful bird also serves as conveyance for Vikata, an incarnation of Lord Ganesha.

It is said that Lord Indra took refuge under peacock wing when it was unable to defeat Ravana. He then blessed the bird with courage to take on the snakes. It is also said that as a result of a curse, Lord Indra was transformed into a peacock with thousand eyes.

Thus, peacock is not only associated with beauty and vibrancy but also holds an important place in the Indian history and mythology thereby making it all the more special.