To be 'literate' means to be able to read and write correctly, and it is an essential of civilized life, being the bias of almost all intellectual occupation. Reading, is therefore, one of the first things children learn to do in school, and perhaps even before schooldays, at their parents' knee. 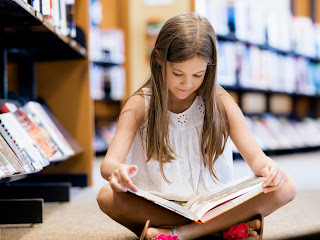 To begin with, they probably don't enjoy reading very much, because, like everything else worth doing, it demands study and hard work.

In most countries, there is one predominating language and according to whether education is free and compulsory or not, the rate of literacy varies -- and very widely indeed, ranging from 99% in Britain and USA to under 1% in over-populated and under-privileged, countries, Malaysia is an unusual example of a country where children are required to be literate in two or three languages; Malay their own language, Chinese or Tamil, and English.

Literacy would never have been possible without printing, and the Chinese are proud of the fact that the first printing press was made in their country in the 6th century. Printing was again invented independently in Germany in the mid-15th century by Gutenberg and used for the first time in England by Caxton in about 1477.

Printing, of course, opened the door to reading. Before the printing press, books were copied laboriously by hand and were therefore scarce, valuable an carefully treasured.

The privilege of being taught to read was accorded to very few and these had a tremendous advantage over the illiterate masses. It was a case of 'in the country of the blind the one-eyed man is King.' However haltingly a man could read, his neighbors relied on him for information and indeed guidance, for the ability to read carried a certain prestige.

Governments were naturally not always in favor of making their peoples literate -- it meant, for one thing, that they might ask awkward questions. And in the Western world, they banned the dissemination of the Bible in the national languages, because they considered religion should be interpreted by the church and not by the direct appeal of the individual to the scriptures.

But eventually, governments were compelled to accede to popular demand, and by the 19th century, most countries in Europe had some sort of system of primary schooling, though in most cases, parents were expected to pay for the privilege of having their children taught to read and write.

Charles Dickens has much to say about the horrors of these 'dameschools' in England, and about the gross inefficiency of the teachers. The idea of universal, compulsory schooling belongs to the 20th century. it is accepted by almost all countries and paid for out of taxation.

As a result, if children leave school unable to read, it is probably that they are unteachable. What, then in the 20th century, is the importance of being able to read ?.

First of all, it is almost impossible to get a job of any kind -- except mere laboring in the fields or road-sweeping in the towns -- if the candidate cannot read. Modern industry, commerce, and the armed forces, demand the ability to read and write, and it need hardly be said that reading is indispensable in the higher grades of employment.

Secondly, reading is indispensable to a full understanding of the world we live in. Newspapers and magazines keep us abreast of world and national events and in touch with current thought. Without it, we should be ignorant and isolated.

A story is told of an English 17th century peasant, who was told to get of Marston Moor, because the King's forces were about to do battle with the Parliamentary forces. 'What, aren't they friends, then ?' he asked.

Communication with our friends by letter is another factor which enriches life, and again this would be impossible without reading. even the use of the telephone required the ability to read letters, while, that of paying the telephone bill involves reading figures !

The attainment of most skills is greatly helped if we can read. Almost every sport, game and occupation have manuals of instruction written about them. And this is just an example of a hundred other items which go to make up a civilized life and which depend on the ability to read.

But the most important reason for reading fluently and well is the world of books. Textbooks, novels, biographies, the scriptures of the world religions; all these help us to understand the world of the past, interpret the present, and plant for the future. It is, of course, possible to 'overdo' reading, and become 'bookish', preferring the world of the written word to the realities of living experience, but this is the failure of relatively few.

Most people find instruction interest, happiness and a release from loneliness in reading. they enjoy collecting their own personal libraries, and using the public libraries. Book sellers and publishers gain a livelihood from the world's insatiable demand for books, and fine art dealers from those who seek books which are rare or finely produced. Without the ability to read, the life of man would be immeasurably poorer.