In India, different regions experience different climatic conditions. While in summers, certain regions in the country may experience extreme heat others may have a rather less hot but humid climate. 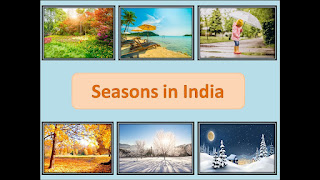 What Causes Change In Seasons?

The tropical and sub-tropical parts in India consist of four seasons namely winter, summer, monsoon and post monsoon. As the change in day and night is caused by the rotation of the earth on its axis similarly the change in seasons is caused by the revolution of earth around the sun in elliptical orbits. The difference in the intensity of seasons in different parts is a result of the slight tilt of the earth.

At different times during the year, the northern or the southern axis is closer to the sun. During this time the part closer to the sun experiences summer as it recieves direct heat from the sun. Whereas in winter, the earth moves away from the sun in the elliptical orbit and hence the sun rays have to travel a longer distance to reach the earth, which results in lower temperature on the earth at that time of the year.

The above stated are the natural processes which bring about the change in the seasons around the year. The changes by these processes are subtle and people can easily adapt to the whereas the change in seasons caused by anthropological factors such as emission of greenhouse gases are more adverse and extreme and cause difficulties to living creatures and even property.

Geographical Aspect of the Indian Lands

India’s geography is extremely contrasting at different places: With the Thar desert in the west and Himalayas in the north. This diversity in topography affects the climatic and cultural conditions in various parts of the country.

India can be regarded as both tropical and sub tropical as the tropic of cancer passes roughly through its center. The Northern Part is kept relatively warm as the Himalayas act as a barrier to the cold central Asian wind entering the country. Extreme temperatures recorded in India are 51 degree Celsius in Rajasthan and the lowest being -45 degree Celsius in Kashmir.

The Physical Features are divided into six regions as stated below:-

A calamity is addressed as a disaster when it has severe effect on life and property which results in death and loss of valuable monetary assets. Disasters due to seasonal changes and effects of it are a bit common in India. Natural disasters may be the result of earthquakes, volcanic eruptions, hurricanes etc. The areas subject to heavy rainfall are more prone to flash floods and cyclones whereas certain areas in the southern parts experience severe droughts. In colder regions of Himalayas and areas of Jammu and Kashmir, Himachal Pradesh and Sikkim, snow storms and avalanches are the cause for destruction of life and property.

India is a land of diversity and this diversity can also be seen in its seasons. Nature is truly incredible. Change in season throughout the year offers a good experience to the inhabitants of the country. However, extreme weather conditions can at times be hazardous.