The right to 'strike means the right to withdraw labor for one of several reasons; as a means of enforcing wage increases, of improving employment conditions, of showing sympathy with other strikers, sometimes overseas, of showing displeasure at the employment or dismissal of a 'trouble-maker' or a non-Union worker, and occasionally of gaining a political objectives. 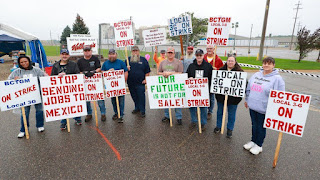 'Striking' as a means of 'industrial action' is universally legal today, though in wartime, National defense measure illegalize it, and it is "unquestionally" right that the worker should enjoy this freedom of action. In the individual's case, striking only amounts to the withdrawing of layout, but between 1918 and 1939 both British and American lawyers tried to show that collective withdrawal amounted to conspiracy, but neither country was foolish enough to press this to its logical conclusion.
Britain has always kept strike action carefully out of the legal sphere, in the present century.

The fact is that any enlightened government accepts the right of the workers to go on strike as art of his basic personal freedom, and when large numbers, by so doing, seriously upset the national economy by essential production to a halt, or prove themselves an inconvenience to the general public, a solution is sought by an unofficial process of collective bargaining, sometimes with trade unions, sometimes without them. In this way, a solution is nearly always reached at some point and the men and women go peacefully back to work.

A case in point was the strike of motormen in London, which greatly inconvenienced the 'commuting' workers. Some people wanted the strike broken, but the government refused, despite the fact that electric train driving is a government service. The strikers argued that precisely, because their job was responsible, it should be better paid. Finally, a solution was reached.

But what happens about wages during a strike ? Nowadays, the official 'Union' strike is a planned measure, and funds are set aside to provide 'strike-pay' -- a minimal wage. When funds run out, either other unions help with loans, or the strike is broken.

Thus, it is seen that there is a real economic basis to strike action, which in most countries is a highly organized Trade Union affair. The worker's advantage, as an individual, is that his personal grievance can be speedily rectified by the Shop Steward, who, if he considers it justified, will demand satisfaction of the management.

This is rarely refused, as no business wants to face the loss incurred by a strike. But both employer and 'Union' object t 'wild-cat' strikes, often the impulsive and unreasonable action of the few, called on grounds hard to justify, throwing the business into chaos, and bring industrial action into disrepute.

In all democratic countries today, the employer and the employee are legally held to be equal, but of course, this was not always so. Before 1875 in Britain, the employer who broke his contract was only liable for a civil offence; the employee was convictable for a criminal offence, but since then, the law has kept out of the picture, except in the minor matter of the giving and receiving of due notice.

The whole history of the 20th century had been one of developing strike action, of many different kinds. Between 1906 and 1917, Russia saw a series of strikes in her revolutionary period. There was one in Germany in 1920, against the Kapp Putch, in Britain in 1926, held in sympathy with the Miner's Federation and in Italy during the first World war.

'Sit-down' or 'Stay-in' strikes were frequent in France in the 1930s and also among workers in the colonial territories between the wars. In Russia, the aim was political; to cause a social revolution by establishing a 'workers' society'; in France in the 1930s it was the same, though unsuccessful. Striking for political reasons is comparatively rare; social reasons are more commonplace, but sometimes, one leads to the other.

Strikes, for whatever reason, are both legally and morally justified, provided their grounds are reasonable, and provided they do not endanger the country in wartime. The fact that they may be inconvenient is unfortunate, but no adequate reason for banning them.

the fact that worker's pay demands are sometimes exorbitant is true, but the final check on these is a simple matter of economics. If a firm cannot afford its wage bill, it has to go out of business, and the worker must choose whether he wants it to happen, knowing that it may have disastrous effects on himself.