Dr. Rajendra Prasad is the 'Ratna' of India and 'Gaurav' of Bihar.  Rajendra Prasad was the first President of India, he remained in this position for about 10 years.  The country progressed well during this period.  Their services are priceless and many.  Rajendra Prasadji was born on December 3, 1884.  He was born in a village named Jiradei in Saran district. 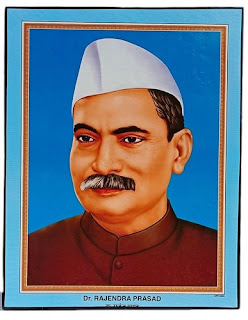 His elder brother Shri Mahendra Prasad had brought up his younger brother Rajendra Prasad and helped him to get higher education.  Rajendra Babu in Patna's T.  Of .  After getting education in Ghosh Academy, he passed the entrance examination in first class from the University of Calcutta in 1900.
He got the highest marks in this examination.  He was praised all over the country.  In 1906, he completed his M.  a .  Passed the examination and after that the examination of M.L.L. Rajendra Babu was always the first in all his examinations, this is a valuable feature of his education and talent.  Everyone was in awe of his ability and scholarship.  His name spread throughout the country.  After finishing his education, Rajendra Babu started his practice first in Calcutta, then in Patna High Court.  He got good success in this.  Advocacy sparked.  got a good income.
But, great men are not born for themselves.  They get their breath only after completing some big work.  In 1917, when Gandhiji raised his voice against the British in Champaran, Rajendra Babu met Gandhiji and he (Rajendra Babu) became his disciple.
He kicked off the moving advocacy and took a vow to serve the country.  Although he was constantly troubled by asthma, he did not run away from the hardest labor for the country.  He was a sincere, passionate, enthusiastic, honest and hard working worker.  His body was thin, but his spirit was strong.  He pioneered the organization of Bihar.  Patna's 'Sadakat Ashram' is the fruit of his tireless service, by which he established the roots of Congress in Bihar and strengthened Hindu-Muslim unity.
In 1906, he joined the Congress.  In 1911 he became a Congress representative and in 1912 he became a member of the All India Congress Committee.  For many years he worked as Professor at Langat Singh College in Muzaffarpur and at the City College and Law College in Calcutta.  In 1919, when there was a movement against the Rowlatt Act under Gandhiji's supervision, Rajendra Babu openly supported him.  He was imprisoned several times for his participation in the freedom struggle of 1920, the non-cooperation movement of 1921 and different political movements of 1922, 1939, 1940 and 1942.
At times he even had to use sticks of the police.  When India became independent in 1947, Rajendra Babu became the first Food Minister and then the first President of India.
Rajendra Babu was a representative of Indian culture and general public, so he was loved by all.  He was a living example of simple living and high thinking.  He wore Indian clothes all his life, never wearing foreign clothes.  He was the embodiment of simplicity and truthfulness.  His life inside and outside was the same.  He was the first among the followers of Gandhiji.