Economic planning refers to the forecasting of the needs of the country's economic wealth and services for a certain period by the state agencies. 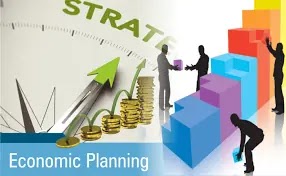 In other words, it can be said that economic planning is the process of making optimum use of available resources to achieve well-defined economic goals.

According to the economist Gunnar Myrdl, economic planning is the program related to the policy of the national government in which the system of state intervention in the activities of market forces is implemented for the upliftment of the social process.

The concept of economic planning became popular after the Great Depression of 1930.  The Great Depression exposed the shortcomings of capitalism, because the free market economy of capitalism led to widespread unemployment, poverty, inequality of income and gross neglect of its social ends.  All these factors compelled the economists to find an alternative.

The Soviet Union (USSR) first put forward the idea of ​​National Planning and adopted it.  After long discussions and deliberations, the first Soviet plan was started in the year 1928 for 5 years.  Economic and social planning is mentioned in the Concurrent List of the Seventh Schedule in the Constitution of India.