The chronological description of important, specific and public sector events, facts etc. related to a person, society or country is called history.  History also presents the social, cultural, political and economic condition of a particular society and the changes that take place over time in these conditions. 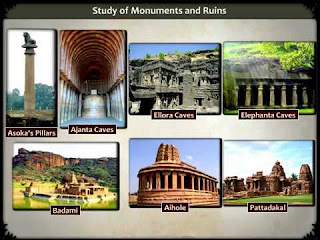 To know the history of a country or place and in its proper analysis, archaeological evidence and sources have an important role.  Archaeological evidence includes inscriptions, coins, monuments, buildings, statues, utensils, etc.  Most of the archaeological evidence is obtained from the excavation of ancient mounds.  The mound is the raised part of the earth's surface, below which the remains of old settlements exist.
These can be of many types, such as single-cultural, main-cultural and multi-cultural.  By excavating ancient mounds or monuments, performing sequential historical analysis on the basis of objects and artifacts found there, is called archeology.
Excavations in North-Western India reveal cities that were founded around 2500 BC.  From the excavations, we have also got information about the material culture developed in the Ganges valley, what kind of settlements the people of that time lived in, what was their social structure, what kind of pottery they used, in which type of houses.
Where did they live, what grains did they consume in food and what kind of tools and weapons did they use.  Some people of South India used to bury tools, weapons, pottery etc. in the grave along with the dead person's body and big stones were erected in a circle over it.  Such monuments are called megaliths.  The time can be determined by measuring the decrease in the existing C14 in an antique.
Radiocarbon dating is a method by which it is found out to which period an object belongs.  Radio carbon or carbon-14 (C4 is a radioactive isotope of carbon, which is present in all living things. Radiocarbon dating method has shown that agriculture was practiced in Rajasthan and Kashmir around 7000-6000 BC.  It was also in the past. The history of climate and vegetation is known by examining the remains of plants, especially by the analysis of pollen. By examining the bones of animals, their age is identified and their domestication and many types of work.

study of coins is called Numismatics. Historical events are shed light on the basis of currency formation and the amount of metals used in them. In ancient times most of the seals were made of metals.  There were no inscriptions on coins and coins, only figures existed, they were called punchmarks or Ahat coins. Archaeological excavations in India have yielded a large number of molds of copper, silver, gold and lead coins.
Most of these  The molds belong to the Kushan period i.e. the first three centuries of Christ.  Symbols are found on the early coins found in India, but the names and dates of kings and deities are found on later coins.
The tradition of engraving inscriptions and dates on coins was first started by the Greek rulers.  Coins were used in the payment of donation-dakshina, purchase-sale and salary-wages etc. Therefore, coins also have an important contribution in the study of economic history.  Most coins have been found in India from the post-Mauryan period, which are specially made of lead, putty, copper, bronze, silver and gold.  The Gupta rulers issued the largest number of gold coins while the Kushan rulers issued the most pure gold coins.  The Satavahana rulers issued the maximum number of glass coins.
Inscription
inscriptions are more important than coins.  Its study is called epigraphy.  The oldest inscription regarding India has been received from Bogajkoi of Central Asia.  The names of the Vedic gods named Indra, Varuna, Mitra and Nasatya are found in this inscription.
The study of the ancient date of inscriptions and other old documents is called Paleography. Records are found on seals, pillars, stupas, rocks and copper plates and in addition to temple walls, bricks and sculptures are also found.  The earliest inscriptions are in the Prakrit language and date back to the 3rd century BCE.  The Sanskrit language began to be found in the inscriptions from the second century AD.  And in the fourth-fifth century, it was widely used everywhere.
Scripts used in inscriptions:
1. Brahmi script: Most of Ashoka's inscriptions are in Brahmi script.  This script was written from left to right.
2. Kharoshthi Script: Some inscriptions of Ashoka are in Kharoshthi script which was written from right to left.
3. Unani and Aramaic scripts: These scripts have been used in the inscriptions of Ashoka in Pakistan and Afghanistan.
Many inscriptions of Mauryan emperor Ashoka have been found from different parts of the country, which throw light on the extent, dhamma and governance policy of his empire.  The Hathigumpha inscription obtained from Udayagiri gives information about the achievements of the Kalinga king Kharavela.  The Junagarh inscription of Shaka satrap Rudradaman gives information about the Shaka rulers Rudradaman, Ashoka and Chandragupta Maurya.
Major inscriptions and ruler
records                                       Ruler
1. Hathigumpha inscription - Kalinga king Kharavela
2. Aihole inscription - Pulakeshin-11
3. Nashik inscription - Gautami Balshree Rudradaman
4. Junagadh inscription - Rudradaman
5. Prayag pillar inscription - Samudragupta
6. Mandsaur inscription - Malwa king  Yashovarman
7. Gwalior inscription - Pratihara king Bhoja
8. Devapada inscription - Bengal ruler Vijaysen
9.  Bhitri and Junagadh inscriptions - Skandagupta
Note: The first mention of India is found in the Hathi Gumpha inscription.
Information about their religious tolerance and their culture is obtained through the Nasik Guha inscription of Vashishtiputra Pulumavi.  The Prayag pillar inscription of Samudragupta gives information about the conquest of Samudragupta and his policies with the conquered kings.  Most of the inscriptions of the Maurya, post-Maurya and Gupta periods have been compiled and published in a book called Corpus Inscriptionum Indicaram.
The oldest inscriptions are found on the seals of the Harappan culture.  This is around 2500 BC.  Poo.  are of.  The inscriptions of the Harappan culture have not yet been read.  These are written in the pictographic script, in which ideas and objects were expressed in the form of pictures.  The oldest inscriptions that have been read are those of Ashoka of the 3rd century BC.
The first success in reading these inscriptions was in 1837 by James Prinsep, who was then serving in a high position in the service of the East India Company in Bengal.