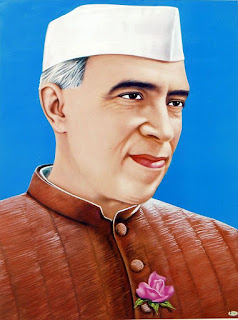 Nehruji was born on 14 November 1889 in the experiment.  His father Pt.  Motilal Nehru Allahabad was a renowned lawyer, who was influenced by western civilization.  Initially, all the management of Jawaharlal's supervision was done by F.  Tea .  He had his early education at home by an English woman named Brooks.
In 1905, at the age of 15, Nehru went to England.  There his name was written in the famous Harrow Public School.  After this he took BS-C in Science from Cambridge University.  Passed the exam  Then, from the same university in 1910, M.A.  did .  He returned to India in 1912 after passing the barrister's examination.  In this way, Nehru got education abroad for seven years.
It had a profound effect on his mind.  On his return to India, he started barrister.  In 1916, he was married to Smt. Kamala Nehru.
Nehruji was a true Indian.  He did not see the plight of the country.  He kicked the barrister and took a vow to serve the country and the people.  In 1916, when the Congress session was going on in Lucknow, he met Mahatma Gandhi.  Gandhiji had a deep impact on him.  He became his greatest devotee and disciple.
He took off the clothes of the rich, burnt his filthy clothes and jumped into the war of independence like a true ascetic.  Now he started actively participating in the freedom movement under the leadership of Gandhiji.  He saw the extreme poverty of the Indian people very closely and saw the plight of the country under the British rule.
When the Prince of Wales of England came to India in 1921, Nehru went ahead and showed him the black flag.  For this he was put in jail.  In 1923, he became the head of the Indian Congress Committee.
In 1929, he was elected the President of the Congress session held in Lahore.  In this session, the resolution for complete independence of India was passed.  Nehru visited the jail in various movements of 1930, 1932, 1934, 1940 and 1942.  Keep doing  The British government kept him under house arrest from 1942 to 1945.
In prison, he would often study books, write books and reflect seriously on the country's independence.  When India became independent on August 15, 1947, all the people elected him as the first Prime Minister of the country.  He remained in this post till the end of his life.  Nehru was such a Jawahar of India, whose price cannot be estimated.  He was a wanderer, honest and true ruler of people's life, service.  His vision was very broad.
Not only this, he was the soul of Congress.  After his death, it seemed as if the Congress had died.  Nehru was at the forefront of those who followed Gandhi's ideals in the true sense.  He knew the power of time.  He was busy and agile in every moment of life.  Used to work for about 18-20 hours every day.  He had sacrificed his life at the feet of Mother India.  Such a great man takes birth in any country after ages.
It is a matter of sadness that on 27 May 1964, Nehru left the world forever leaving all his qualities on earth.  Nehruji has given many practical ways to organize Indian life.  If our leaders of today follow their path, then there will be welfare of the country and the world.  Today the absence of Nehru is hurting us badly.  God bless, those great men are born again and again in our country!