Mahatma Gandhi Introducing Mahatma Gandhi is like showing a lamp to the sun.  He was one of the great men of our country, from whom a new history of national life has been prepared.  India's independence is the fruit of his tireless services. 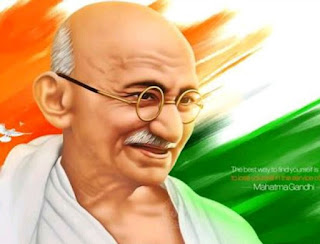 How can we forget them?  They are settled in our Rome - Rome.  His voice is coming from the soil of India, the whole sky is resonating with his immortal voices.  They are house-to-house like divine men like Rama, Krishna, Buddha, Shankar and Tulsi.
Mahatma Gandhi was born on October 2, 1869 in a place called Porbandar in Gujarat.  His father Karamchand Gandhi was the Diwan of the princely state of Rajkot.  His mother took care of him very well.  On the boy Gandhi, whose real name was Mohandas Karamchand Gandhi.  His religious mother had a great influence.
He later became famous as 'Gandhiji'.  His education started in a village school.  In 1887, he passed the entrance examination.  He was not very quick in reading and writing earlier.  He himself has written that 'I was a very shy boy, I was not friends with anyone.  Keeps his job in school.  He would reach school as soon as the bell rang and would go home as soon as it was closed.
I did not like to talk to any other boy, because I was afraid that someone might make fun of me.  They had become victims of bad habits like drinking beedi, stealing, stealing money from pocket, eating meat etc.  But later Gandhiji left all these evils one by one.  In 1891, he returned to India from England after passing the barrister.
He became a barrister in Bombay, but his barrister did not work.  Once he went to South Africa on a trial work.  There he had to face great troubles.  He saw that Indians were not being treated well there.  Gandhiji was deeply hurt.  He started 'Satyagraha' there and he got success too.
Gandhiji returned to India in 1914.  He saw the poverty and slavery of the country, the atrocities of the British and their arbitrary rule.  His eyes opened and he took a vow of service to the country.  Pledged to liberate the country from the British and then gathered in this great yagya, from 1917 onwards, he openly opposed the atrocities of the British.
In Champaran, he started the first Satyagraha movement against the British.  He became the leader of the farmers.  Went to every corner of the country.  The public welcomed him.  The great revolution of 1942 took place.  The whole country woke up with the slogan 'Do or Die'.  Many leaders were imprisoned along with Gandhiji.  But, the public did not stop, did not bow down.
In the end, the British were helpless and had to liberate India on August 15, 1947.  But as they went, they divided the country into two pieces, India and Pakistan.  This made Gandhiji very sad.  On the evening of January 30, 1948, the father of the nation, Bapu, who liberated the country, was killed by the unfortunate Nathuram Godse with a pistol.
The leader of all humanity has risen.  We became orphans.  But, 'Gandhiji ki Jai' still fills a new spirit and enthusiasm in our lives.  Today the story of Bapu has become a story of the ages.  they are immortal even after death.