The credit of presenting the first outline of Indian planning goes to the popular engineer and former Diwan of Mysore province, M.  Visvesvaraya mentioned in his book Planned Economy for India (published in the year 1934). 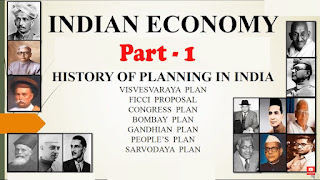 His ideas on state planning were actually practical and useful like those of democratic capitalism (like the US), with an emphasis on industrialization, the transition of labor from the agricultural sector to industries, through which the national income would be raised over a decade.

The target was to double.  After the publication of this book, N.  Subbarao's Some Aspects of Planning, Dr.  PS  Principal of Planning of Loknath and K.N.  Singh's book titled Economic Reconstruction came out.