The development of Indian civilization and culture is traced to the Indus Valley Civilization, which is known for its vast empires, trade, cultural development and economic success.  It is named after Aryavarta, the Aryans who settled in North India. 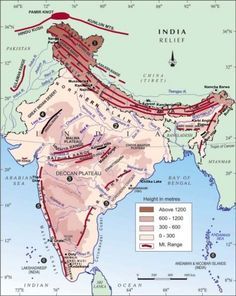 India is a country of diversity, located in the south-central part of the continent of Asia.  Its quadrangular shape and location have given it a distinctive physical diversity.  High in the north of this country.  There is an extension of the Himalaya Mountains, large river basins in the middle, forested hills in the north-east and south and sandy deserts in the north-western part.
☆Economic impact of india's federal system ☆
It is a large geographical unit delimited by the Himalaya Mountains in the north, the Hindukush and Sulaiman ranges in the north-west, the Purvanchal hills in the north-east and the vast Indian Ocean in the south, which is called the Indian Sub-Continent.
☆India and the Asian development Bank ☆
The Indian subcontinent comprises five countries including India, Bangladesh, Bhutan, Nepal, and Pakistan.  The order of the countries larger than India in terms of area is as follows - Russia > Canada > China United States > Brazil > Australia > India.
☆national income☆
India is located in the Northern Hemisphere and Eastern Hemisphere respectively in latitudinal and longitude.  The mainland of India extends between south to north 8° 4' to 37° 6' north latitudes and west to east 68° 7' to 97° 25' east longitudes.
If we include the island groups of India, then its extension in the south starts from 6 ° 45' north latitude.  Thus the latitudinal extent of the whole of India is between 6° 45' (located in the Bay of Bengal) to 37° 6' north latitudes.
The northernmost point of India is Indira Kaul (37 ° 6' North Latitude), which is located in the state of Jammu and Kashmir.  The southernmost point of the Indian mainland is Kanyakumari or Cape Comorin Island (8°4' north latitude), an island located in the state of Tamil Nadu, to the southeast of the mainland, the Andaman and Nicobar Islands (in the Bay of Bengal).  ) and the Lakshadweep Islands (Arabian Sea) are located in the south-west.
☆private income☆
The southernmost point of India is Indira Point, which is the southernmost point (6°45' north latitude) of the Great Nicobar Island of the Andaman and Nicobar Islands.  It was submerged in the sea in the year 2004 due to tsunami waves.  This point was earlier also known as Pygmalion Point or Parson Point.  Its distance from the equator is 876 km.