This is the latest organization related to the World Bank Group, which was established in April, 1998.  It is a joint venture with International Finance Corporation.  Its authorized capital is $1.08 billion. 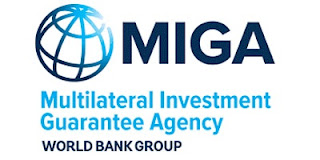 Through its guarantee program, it provides investment insurance to cover political risks.  It can only insure new investments, which include expansion, privatization and financial restructuring of existing investments.  Its main objective is to encourage the flow of direct investment into member developing countries.
☆Organization and structure ☆


To receive aid from MIGA, it is necessary for the country to be a member of it, for which it has to sign the MIGA agreement.  At present MIGA has 180 members.  To become its full member, a country also has to give its capital contribution to MIGA.

Like other countries, India also signed the MIGA Agreement for the Protection of Foreign Direct Investment on 13 April 1992.