Trends in growth of national income

Trends in Growth of National Income 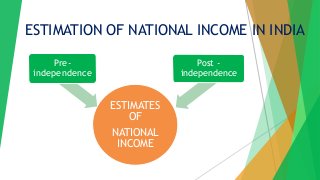 From the study of these data it becomes clear that the growth is irregular.  The incidence of growth rate increases with the fluctuations of agriculture The growth rate also decreases or increases depending on the increase or decrease in agricultural production.

It is argued in this regard that it is natural in all agro-based economies.  But it is worrying that even after huge investments in the schemes, the uncertainties prevailing in the agriculture sector have not been mitigated.

If the monsoon is not favorable, then even today the agricultural sector becomes chaotic and the development of other areas is adversely affected.

Since 1980-81, the national income has increased by 5.5% per year.  But the main reason for the increase in the economic growth rate is the rapid expansion of the service sector.  Apart from this, only a few states of the country have benefited from rapid economic growth and the rest of the states have remained very backward.

In the 1980s and 1990s, inequality in national income increased, that is, the increased income remained concentrated only in the affluent classes, while the people of the weaker sections did not get the full benefit of the rapid growth rate.